“I have antivirus software installed but I’m still getting scam emails!”

Does that sound familiar?

Spam, phishing, criminal intent emails... inboxes are still the most useful tool for cybercriminals to steal sensitive data and access computer networks. Most companies use antivirus software of some sort but antivirus doesn’t stop new threats or advanced malicious-email attacks.

Scam email is a serious problem because hackers use it to deliver new ‘fast-break’ or ‘zero-day’ attacks. Endpoint antivirus software can detect known threats and it can play a role in stopping threats that might be introduced via means other than email, like on a USB or flash drive. But zero-day malware delivered in scam emails is likely to fly under the antivirus radar.

Cyber criminals move at rapid pace using the element of surprise. It can take hours or even days for antivirus vendors to identify new threats and deploy updates and then there’s a further delay while their customers download and install those updates. During this time, while the update process is happening, unpatched computers are vulnerable to attack.

Traditional antivirus solutions are well-known to sophisticated cybercrime networks who will test and refine their attacks to ensure that they’re going to get through.

In one email scam MailGuard intercepted the scammers used over 160 variations of the attack to stay ahead of antivirus updates.

Companies that rely on endpoint antivirus protection alone are playing Russian roulette with their data-security. Cybercriminals know that humans are a cybersecurity loophole. Their objective is to get email with a malware payload into a company’s inboxes, because people are much easier to trick than machines. If they can get one person inside a company to open a scam email and click on a link, they can infect the whole company’s computer network.

Millions of criminal-intent emails are sent every second of the day, so the odds are good that some of those emails are probably in your team’s email inbox right now. I’m willing to bet that at least one person in your office has seen these messages pop up in their inbox.” 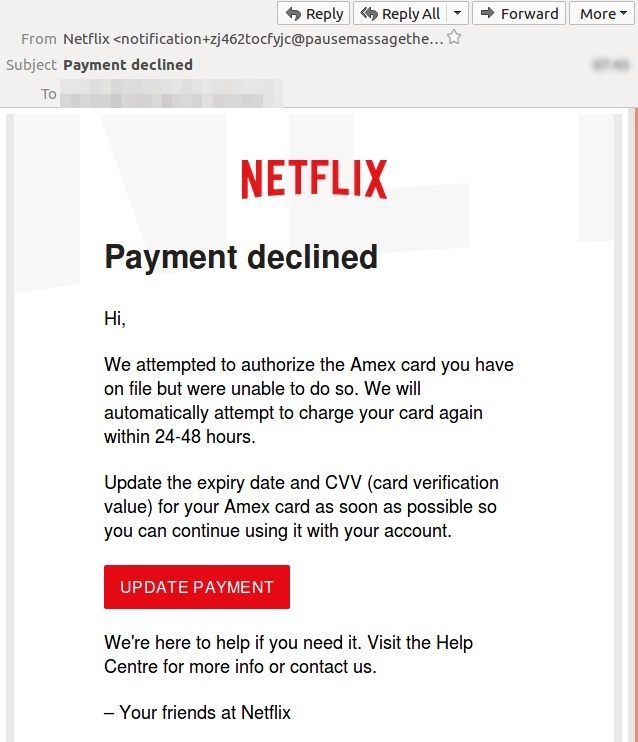 Take a look at the screenshot above. It’s an actual scam email that MailGuard intercepted earlier this year.

The ‘update payment’ link in this message goes to a phishing website with bogus Netflix branding - see screenshot below: 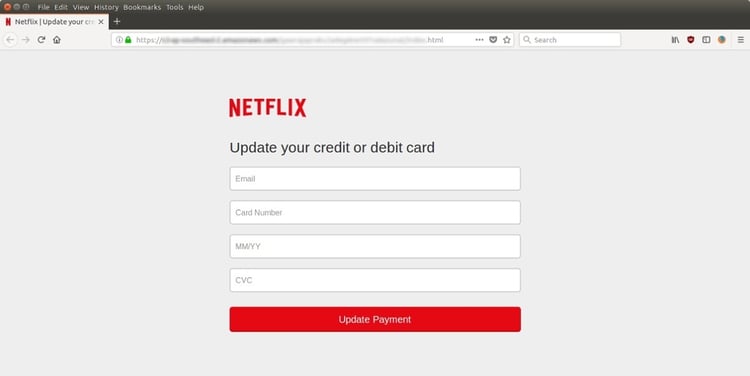 Actually, the sole-purpose of this webpage is to collect the personal details and credit card data of scam victims who were tricked into clicking the email link.

A message like this is unlikely to be detected by antivirus software. Are you 100% sure there is nobody in your office who would be tricked by this email?

Cybercriminals put a lot of effort into making their scams look as convincing as possible. To many people, this message would be indistinguishable from a real Energy Australia email. The really cunning thing about scams like this is that even if the recipient is not an Energy Australia customer, they might open the message and click on the ‘view bill’ link just to find out why they were getting a bill from a company they didn’t owe money to. Curiosity is a powerful incentive.

The link in this message points to a .zip file which contains malware in JavaScript format. Link-to-payload emails of this type deliver spyware, ransomware and viruses which can corrupt hard-disks, steal sensitive data, and cause massive financial losses.

If your company’s inboxes aren’t protected, messages like these are being received by your staff and it’s a matter of time before someone has a momentary lapse of judgement and clicks on the wrong link.


New scams are appearing every day and they are undetectable by endpoint antivirus software.

MailGuard is different to traditional antivirus. With Hybrid AI (Artificial Intelligence) threat detection engines, MailGuard predicts and anticipates new threats as they appear. MailGuard is a cloud-based security layer so it can apply immediate protection to its customers around the globe without download or installation delays.

MailGuard's cloud-based protection can be implemented for a few dollars per staff member per month and will significantly reduce the risks posed by malicious emails.