The persistent rise of cryptocurrency is changing the internet in a variety of ways, and although it’s relatively early days there's already been some high profile cryptocurrency fraud incidents. As soon as a new technology hits the www, scammers move in to grab what they can, and crypto is no different.

Over the last 12 months or so, there has been a growing number of crypto scams appearing on Twitter. They’re a sneaky twist on the old ‘Nigerian Letter’ hoax; scammers tweet something like ‘Bitcoin giveaway’ or ‘free crypto’ and promise that if you send them a small fraction of a coin to verify your account, they will send back 10 times as much.

You might think that nobody would be silly enough to fall for an old gag like that, but the really devious part of this scam is that the crooks behind it are impersonating the Twitter accounts of high profile cryptocurrency influencers to gain people’s trust. Crypto is still a small world, and there are some well-known investors and founders who have a lot of sway in the online community.

Recently, a scammer using the Twitter handle @lisa_jones4810 set up a hoax account mimicking Litecoin luminary Charlie Lee and started offering free coins. If you’re in the crypto-sphere, this is like someone impersonating Elon Musk and promising to send you a free Tesla if you put $50 in his bank account. It’s the same kind of psychological trickery that scammers use when they send out fake Netflix invoices; big names inspire trust. 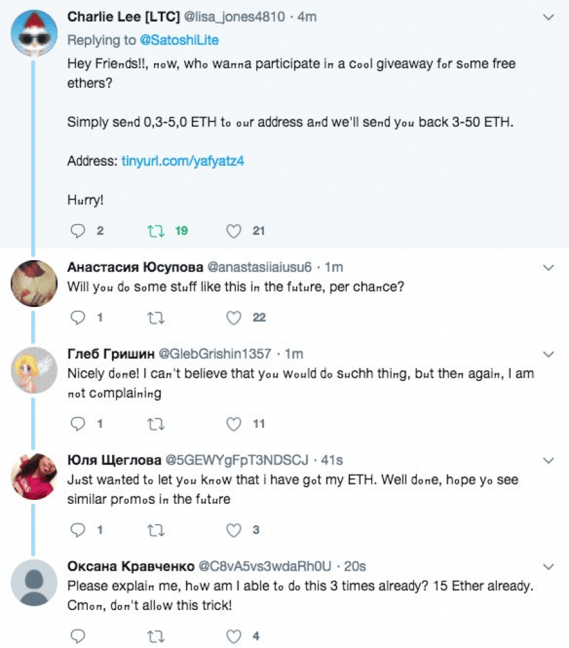 (Image: in a reboot of the old ‘Nigerian Letter’ scam format, social media fraudsters pose as crypto influencers to extort cryptocurrency from victims.)

The proliferation of cryptocurrency scams on social media is a reminder that we always have to be careful when we’re doing business online, whether it’s through email, cryptocurrency exchanges or social channels. Technology keeps changing but some things always stay the same; there will always be crooks trying to make a quick buck, ripping off unwary people.


A savvy self-styled ‘crypto hygienist’ going by @djbooth007 has made an ‘anti-bot bot’ which is now automatically replying to ‘free crypto’ tweets with a huge banner proclaiming ‘that tweet is a scam!’.

New technology creates opportunities for criminals but fortunately, there are also cybercrime-fighters looking out for scams and striking back.


Bitcoin and cryptocurrency, in general, have become an attractive target for cybercriminals, because of their soaring value and the ease with which they can be laundered and sold. Recent research conducted by Reuters found that approximately 980,000 Bitcoin have been stolen from exchanges since 2011. At current valuation, that’s nearly US$11 billion worth.

The frustrating aspect of cryptocurrency theft, from my cybersecurity POV, is that the underlying Blockchain technology that crypto is built on is actually designed to promote accountability and transparency. Blockchain is a mechanism for making permanent records, so in theory, it should be possible to trace stolen cryptocurrency wherever it goes but ss with every new technology, it takes time to identify the weaknesses in the system and realise its full potential.


Blockchain is a technology in its infancy, but it’s advancing rapidly and we’re only just beginning to see what it can really do. It’s starting to be used to create platforms that transcend mere wealth exchange programs and can help to build communities for exchanging knowledge and developing ideas. Blockchain is a very versatile mechanism that will, in time, play a pivotal role in making the online space more transparent and secure.

There are bound to be more ups and downs in the crypto story, but I’m looking forward to a time when Blockchain technology is synonymous not only with online currencies but also with tools for making the internet more stable and resistant to fraudulent behaviour.

My brand-new venture, GlobalGuard, is designed to be part of that more secure online future. 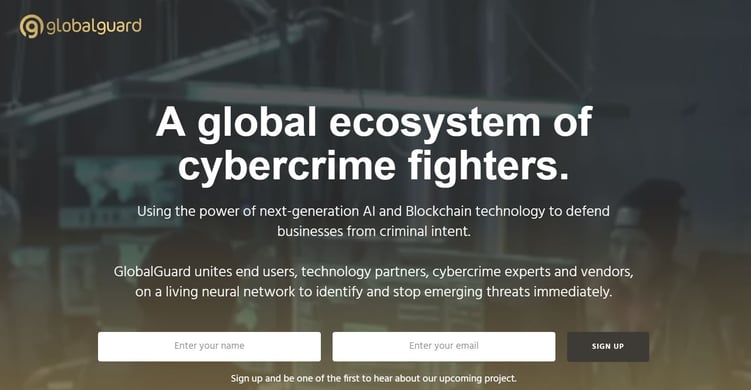 GlobalGuard is a Blockchain technology that’s going to leverage the past seventeen years of MailGuard threat data, in combination with an artificially intelligent neural network that’s trained to detect cybersecurity threats. It will be a mechanism for real-time collaboration to correct the imbalance of cybercrime vs cybersecurity.

Going forward, I want to be working with the smartest minds around the planet to optimise our defence against cyber-attacks. I’ve launched GlobalGuard, in collaboration with DigitalX and EY and we’re actively seeking new partnerships, so check out globalguard.io and get involved with this innovative Blockchain project.

> Join the conversation: follow me on Twitter or LinkedIn to stay informed about cybersecurity issues and news.

The biggest challenge in cybersecurity is keeping up with the new attacks that criminals are always coming up with. They’re ...
Start Reading
Craig McDonald 04 April 2018 15:01:16 AEST 14 min read

Blockchain - the new DNA of cybersecurity?

A lot of people have heard the term “Blockchain” by now and know that it has something to do with Bitcoin and cryptocurrency ...
Start Reading
Craig McDonald 11 May 2018 12:40:09 AEST 18 min read

Beyond crypto: Blockchain as a collaboration platform