Blockchain - the new DNA of cybersecurity?

A lot of people have heard the term “Blockchain” by now and know that it has something to do with Bitcoin and cryptocurrency but Blockchain is more than just crypto, it’s a versatile technology, the applications of which we are only starting to explore.

Everybody associates Blockchain with Bitcoin, because it was the original Blockchain application. There are now more than 1500 cryptocurrencies and they are all based on Blockchain technology, but developers are also using Blockchain to build software, virtual communities and even operating systems.

If you’re like me then you’re not a hard-core tech person so Blockchain might seem a bit hard to get your head around. But let me reassure you; the basic Blockchain concept is not so hard to understand because the whole technology is based on a very simple but ingenious idea: duplication.

Blockchain gets its name from the fact that it is basically an unbroken sequence of connected data records, called ‘blocks’; big sets of numbers organised into a ‘ledger.’

Every time a transaction is performed transaction data is added to the most current block and stored permanently.

When a set of transactions is complete, a summary of that set called a ‘hash’ is automatically created and is included in the next block’s ‘header,’ a meta data space reserved specifically for the previous block’s hash.

The Blockchain ledger is permanent and each link of the chain is connected to the ones before and after it. The hash of each block is included in the subsequent block; so if any transaction is tampered with it has a cascading effect on the other blocks in the chain, invalidating them.

The summary above is very simplified, compared to the true complexity and sophistication of Blockchain but you can probably see now, why Blockchain is such a valuable asset for currency creation. A dollar bill can be duplicated or forged and used illegally, but because cryptocurrencies like Bitcoin are built using Blockchain, every ‘coin’ is verified against the rest of the chain when it changes hands, preventing fraud.

Blockchain is designed to be transparent and verifiable. It’s essentially a platform for identification and authentication, a sort of digital DNA, so it lends itself to all sorts of industrial and social applications.


Coca-Cola has a problem; a sugar problem. In 2008, an Amnesty International report showed that the international sugar industry was not doing enough to ensure that ethical labour standards were being met. The Amnesty report stated that in certain regions sugar cane workers were being forced to endure “conditions analogous to slavery.” Coca-Cola’s product is based on sugar and while they insisted that the sugar used in their beverages was only sourced from ethical plantations it was very hard for them to prove it. Major corporations like Coke have policies that are supposed to ensure that their products meet humanitarian labour standards, but even when they could verify exactly where their sugar came from, Coke couldn’t say with complete certainty that their suppliers were treating their workers properly.

To solve their supply chain verification issue, Coca-Cola is now investing in a Blockchain based system that will track sugar workers, growers, brokers and exporters and is intended to create transparency in the industry. If workers are abused or mistreated they can submit data to the permanent Blockchain anonymously and independently, as part of a decentralised, integrated supply chain record. The Blockchain platform can be applied at all stages and levels of the supply chain, connecting individual plantation workers, processing mills, shipping companies, and consumers.

Blockchain advocates speculate that in the near future it could provide a new model of supply chain monitoring that could be applied to all sorts of commodities and used to verify product characteristics, shipping routes and availability in real time. 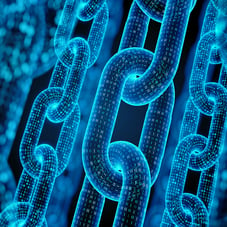 “These concerns are universal … Everywhere that we go and do cybersecurity work, we find that these concerns pop up. The question is ‘What’s blockchain’s role in addressing this? What’s been interesting in our analysis is that blockchain offers at least part of the solution for every one of these challenges.
“Attackers have identified centralized networks as being really vulnerable to focused attacks. Blockchain changes the equation because you have a distributed ledger with multiple authors that have individual control as to what’s entered into the ledger. You also have a validation that occurs through consensus mechanisms that ensure integrity and assurance of what is being entered.”
- Aaron Kleiner, Microsoft

Like most people, I first encountered the Blockchain concept in the context of cryptocurrency, but once I understood the way Blockchain works I could start to see its potential to disrupt the cybersecurity space.

From a cybersecurity point of view, Blockchain technology offers a new way to think about system design that disincentives cyber-attack. It’s like the difference between a community storing all their money in a central bank, and each person keeping their own money in their homes. A bank has security systems, but it’s also an obvious target for bank-robbers who want to make a big score.

Blockchain is designed to be incorruptible and because it’s a decentralised architecture, systems built on Blockchain are more difficult to target with hacking.

Instead of having an entire system built in one location and having all the inputs to that system managed at a central point, Blockchain ecosystems are structurally de-centralised. There’s no one place where a Blockchain platform resides, so it’s very difficult to attack it, compared to a traditional data management system.


Even the world’s largest companies and governments can’t win the war on cybercrime by acting alone. A collaborative approach to applying knowledge to our customer base, our downstream, our collaborators is essential; we’ve all got to participate in stopping these threats.

GlobalGuard is my most recent project; it will be a mechanism for real-time collaboration to correct the imbalance of cybercrime prevention. GlobalGuard will leverage the past seventeen years of MailGuard threat data and IP, in combination with an artificially intelligent neural network that’s trained to detect cybersecurity threats. 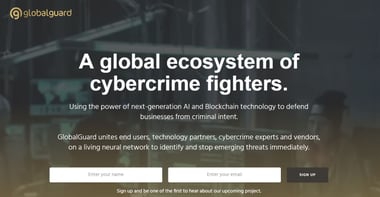 The power of Blockchain is to facilitate collaboration and incentivise people to work together, but of course, the weakness of any currency system is its vulnerability to attack and theft. For MailGuard, a cybersecurity company, entering the Blockchain space is a win-win.

This is an opportunity to leverage massive scale collaboration; to build an unprecedented community of cybercrime-fighters and at the same time offer new and better tools to stop criminals attacking Blockchain infrastructure.

GlobalGuard will be launching soon, so stay tuned.
To keep up with all the news, check out GlobalGuard.io and follow me on LinkedIn.

Follow me on social media to keep up with the latest developments in cybersecurity and Blockchain; I'm active on LinkedIn and Twitter.
I’d really value your input and comments so please join the conversation.