A new fake Dropbox phishing scam targeting users of the online sharing and storage platform is currently in circulation.

The scam invites readers to view files apparently shared by another Dropbox user, in a similar way to other Dropbox scams we’ve reported.

Here’s a sample of the email you should look out for: 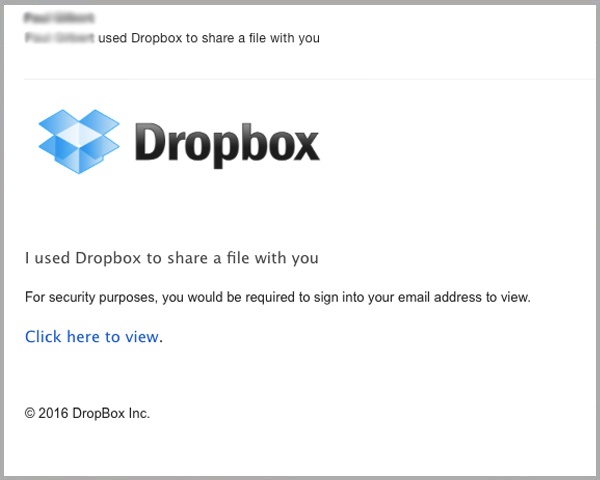 The Dropbox scam appears from a named sender, (we’ve blanked out their details to protect their identity, but let’s call him ‘Joe’), inviting the recipient to view a file recently shared in Dropbox.

Joe’s email account appears to have been compromised – he may have received the same Dropbox phishing scam recently and been fooled into giving away his email account details, allowing the scammers to hack into his account and distribute the scam further.

It’s also possible that ‘Joe’ is known to the recipient, being an email contact saved in his address book, making the scam appear more legitimate.

By clicking on the enclosed link, readers then see the below screen, which encourages them to log-in to their Dropbox account through their webmail account to view the document:

Vigilant users would be immediately suspectful of the URL displyed in the address bar, whose domain gulcdeland.org bears no resemblance to Dropbox.

Although it‘s possible to sign up for Dropbox’s services using a Gmail account they wouldn’t give you the option of signing in using credentials of several email providors, a tactic also used by cyber cirminals in a recent Google Drive phishing scam, which should raise suspicion.

Below shows the screen users will see if they select the Microsoft Outlook sign-in option, a direct good replica of a Hotmail log-in screen: 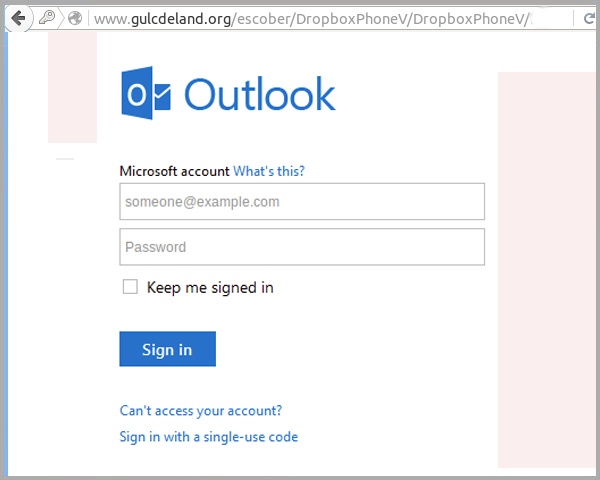 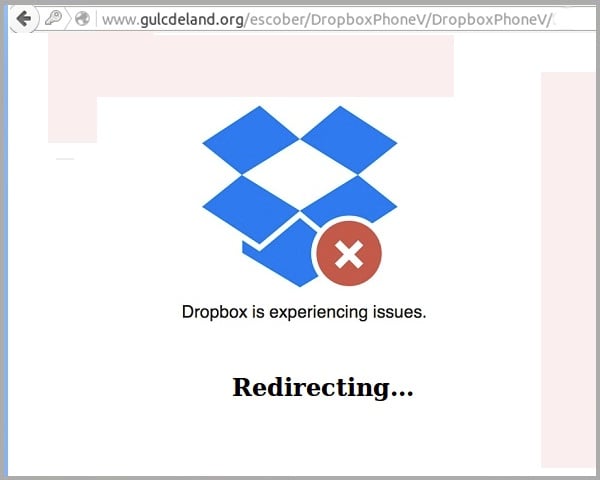 Finally the page redirects to an official Dropbox page, directing users to download its software, giving unfamilair readers the impression that they’ll need to become a Dropbox user in order to continue.

To protect yourself from spam campagins like this Dropbox phishing scam:

You can prevent your business from receiving phishing scams by using cloud-based email filtering and web filtering software, which intercepts these emails before they have a chance to get into your inbox.

By building a multilayered defence for your business, including desktop antivirus, anti-malware and anti-spyware, you can ensure that you have 360 degree protection against a range of known and unknown threats.

Click here to download your free executive guide, Surviving the Rise of Cybercrime, by MailGuard CEO and founder Craig McDonald.

Keep up to date with email scams affecting your business by subscribing to MailGuard’s weekly update.

Organisations have again been the target of a number of spear phishing attacks this week, which MailGuard has successfully ...
Start Reading