ANZ Banking Group customers are the target of the most recent email phishing scam being blocked by the MailGuard team. The email, which features the New Zealand Black Caps, tells recipients that ‘Online Banking is Now Blocked.’ Advising customers that they have been locked out of Internet Banking for security purposes because suspicious activity was detected on the account. Customers are asked to verify their identity in order to unlock their account. 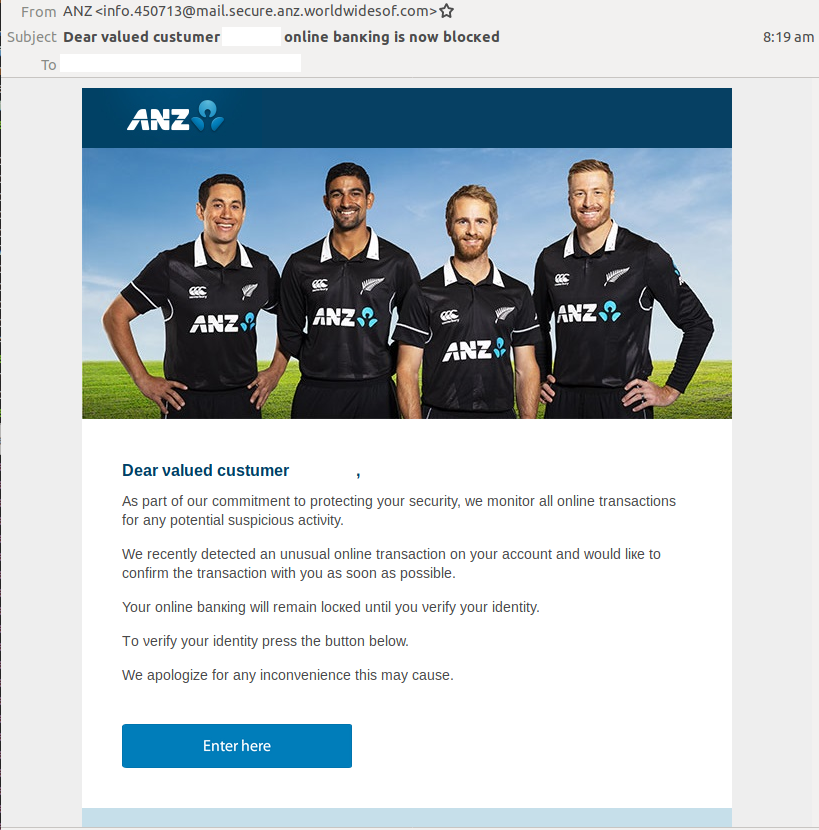 By clicking ‘Enter here’ customers are directed to a replica ANZ Internet Banking login page, however once a user submits their registration number and password, they will receive a message saying “Oops! Something went wrong. Please try again.” 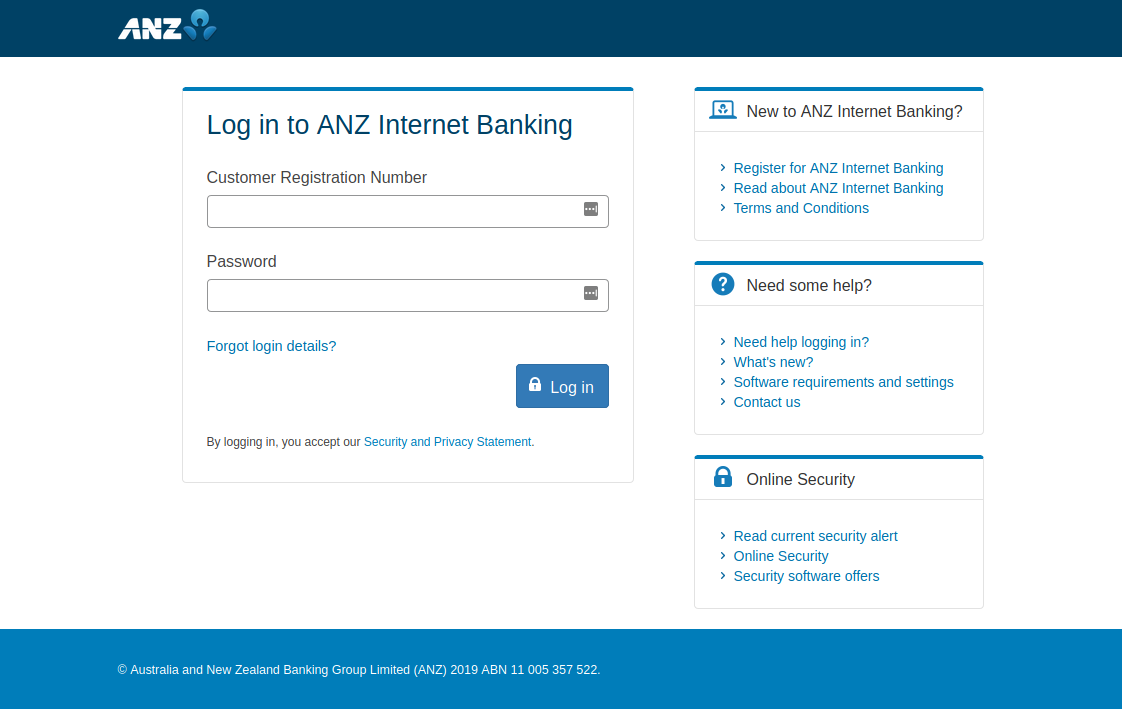 The original email is very long. Scrolling further down reveals an array of links to ANZ marketing campaigns, such as this ‘Bat for your Cap’ game promotion relating to the New Zealand Black Caps cricket team, and other content most notable of which is ‘Your Internet Security.’

The phishing site is hosted on a recently registered domain, which appears as an obvious attempt at brandjacking: web-anz(dot)com. The email display name is also ANZ.

There are several red flags that are warning signs to users that the email is in fact a scam. The most obvious being the From: address. A suspicious looking domain is used. Upon closer inspection, the subject reveals that special characters have been used, most noticeable are the 'K' characters, which are in fact special characters and not an actual K.

The message body also starts with special characters and clear spelling errors in 'Dead valued custumer {first name}. Where {first name} is the recipients email address alias - the first portion of your email address (before the @ symbol).

At the time of writing, MailGuard was the only vendor to identify and block this scam, and it is continuing to intercept attempts by the criminals at reaching a wide number of user email accounts.

Checking the sender details of suspicious emails is one way of verifying whether they are legitimate communications or phishing attacks. In this instance, the email does not originate from an ANZ email domain.

Cyber-criminals frequently exploit the branding of large companies like ANZ in their scams, because their good reputation lulls victims into a false sense of security. Because of the large number of customers, ANZ is a regular victim of these scams.

Phishing continues to be one of the most prevalent forms of cyber-crime. The vast majority of online scams - more than 90% - are perpetrated using email, so it’s wise to always be skeptical of messages from unfamiliar senders asking you to log into your accounts.

What to look out for

As a precaution, avoid clicking links in emails that:

Phishing scams can be enormously costly and destructive, and new scams are appearing every day. Don’t wait until it happens to you or someone in your business; take action to protect your inboxes, now.

Speak to the MailGuard team today to learn more how MailGuard's predictive and advanced email security can help protect your business for a few dollars per staff member per month.

ANZ Banking Group is the subject of an email phishing scam being blocked by the MailGuard team this morning, which is designed ...
Start Reading
Daniel McShanag 28 May 2019 13:30:53 AEST 6 min read

BankWest is the latest bank to be brandjacked in another online banking scam this week. Customers are informed in an email that ...
Start Reading