MailGuard has intercepted a phishing email purporting to be an automatically generated notification, sent supposedly from recipient’s "Mail Cloud system".

Titled “Cloud Sync Err”, the email uses a display name that indicates it is from the recipient’s company “cloud system”, but the email address used in the “From:” field uses a completely different domain. It actually appears to be sent from a German freemail address.

The email body includes a header stating that it “was originated” from an internal source – likely included in a bid to boost its credibility. It informs users that “due to a cloud system synchronisation error”, the user has “6 unreceived mails that are clustered” on the “cloud server”. It claims that the “cloud server will automatically delete these undelivered messages” if the error isn’t rectified by releasing the messages. A link is provided for the user to do so.

Unsuspecting recipients who click on the link to release these messages are led to a intermediary page, before being redirected to a fake Microsoft Outlook-branded page asking for their login details. The intermediary page hosts a little redirect script, claiming it is “checking” the recipient’s email account. This page is an official website for a former NFL footballer that has been compromised, as per the below: 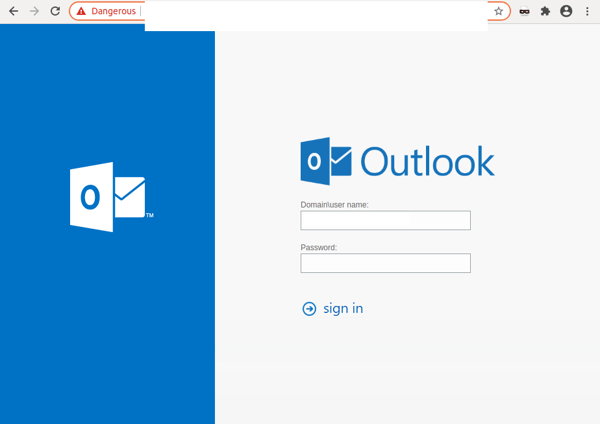 This login page employs high quality branding elements, including Microsoft Outlook's logo. However, it is actually a phishing page that appears to be a compromised site hosted in Greece. Once the user’s credentials are entered and submitted, they are harvested for later use, and the user is met with an error saying that they were unable to login.

Whilst MailGuard is stopping this email scam from reaching Australian businesses, we encourage all users to be extra vigilant against this kind of email and whatever happens, do not respond to it.

The phishing email contains several typical elements that attempt to trick recipients into falling for the scam:

Despite these elements, the email in itself contains several tell-tale signs that commonly belong to fraudulent emails and should help eagle-eyed recipients point to its illegitimacy. These include spacing and formatting errors, as well as the fact that the domains of the URLs of both the intermediary & login pages aren’t familiar.

Cybercriminals frequently exploit the branding of global companies like Microsoft in their scams, because their good reputation lulls victims into a false sense of security. Because of the large number of users globally, Microsoft is a regular victim of these scams.

Phishing attacks can be enormously costly and destructive, and new scams are appearing every week. Don’t wait until it happens to your business; protect your business and your staff from financial and reputational damage, now.

Receiving an email about supposedly pending or inaccessible messages can be alarming, but it doesn’t hurt to think twice about ...
Start Reading
Akankasha Dewan 09 September 2020 21:08:29 AEST 7 min read

MailGuard has intercepted a new phishing email that masquerades as an auto-generated notification from the recipient’s mail ...
Start Reading