History may well remember the 20-teens as the decade of cybercrime.

This year has seen an unprecedented level of new attacks; not only in number but also in intensity. The steep upward trend points to 2018 being worse still. Cybercrime is now the most economically damaging crime category, worldwide. Europol has released data showing that cybercrime is ‘more profitable than the global trade in marijuana, cocaine and heroin combined.’

There were hundreds of online-fraud and hacking incidents this year. From the recent revelations about the Uber data-breach scandal to the Netflix scam, this was a busy year for the cybersecurity industry.

Here are the 4 of the biggest cybercrime stories that dominated the headlines in 2017:


When the WannaCry ransomware worm appeared in May it spread across the globe like wildfire, eventually infecting an estimated 200,000 computers in 150 countries.

WannaCry attacked a security loophole in older versions of Windows operating systems known as the EternalBlue exploit. Once it infected computers it would then replicate itself across networks, spreading quickly and invisibly.

The shock and awe factor of WannaCry came from the serious impact it had on big industry and essential infrastructure. Hospitals in the UK running older computers were forced to shut their doors to patients when their systems went offline. FedEx distribution centres were locked out of their inventory systems. The Spanish telephone network was seriously disrupted. Car factories owned by Renault had to cease production.

Estimates of the financial harm caused by WannaCry are still a topic of debate, but it is generally agreed that the outbreak did damage in excess of US$4 billion.


On June 27 - just weeks after WannaCry - there was another EternalBlue-based ransomware attack.
NotPetya appeared simultaneously in France, Germany, Italy, Poland, the United Kingdom, the United States, Russia and Ukraine.

Ukraine was especially badly impacted by NotPetya. 80 companies and organisations were attacked by the virus, including the National Bank of Ukraine.

Like WannaCry, NotPetya displayed a ransom message on infected computers demanding money to unlock the system, but analysts working on the outbreak quickly realised that extortion was not the true objective of the virus.  NotPetya activates a disk wiper that overwrites an infected computer's boot files.

Because NotPetya mainly targeted Ukranian companies and infrastructure, a theory emerged that the attack was initiated by a Russian government agency as part of ongoing hostility stemming from the 2014 conflict. This theory was strengthened by the timing of the outbreak. Many cybersecurity experts speculate that NotPetya was a politically-motivated attack because the outbreak started on the eve of Ukraine’s Constitution Day holiday.


In October Mathy Vanhoef and Frank Piessens, security researchers at the University of Leuven in Belgium, revealed critical vulnerabilities that exist in all standard WiFi devices. The weakness in the WiFi protocols makes it possible for hackers to read encrypted data on WiFi devices and use them to break into networks.

Upon discovering the KRACK problem, Vanhoef and Piessens immediately notified manufacturers of WiFi devices, who began implementing patches to close the gap in the security of their systems.

The scale of the KRACK problem is huge because WiFi is such a ubiquitous technology in commercial and industrial environments. The issue is exacerbated by the fact that there are many companies still manufacturing devices with unpatched firmware, and countless unpatched devices already in use.

The threat posed by KRACK is twofold; it allows cybercriminals to access supposedly secure data networks and steal information, but it also makes it possible for them to inject viruses or malware that creates Botnets.


IOT is the 2017 buzzword of the year but the Internet-of-Things has also given us the latest and most disturbing cybersecurity threat of the year.

Along with the explosive growth of wireless tech and the rapid uptake of IOT technology it has become clear that IOT is turning into a security nightmare.

There are security weaknesses baked into the firmware on IOT and Bluetooth devices - from high-end surveillance cameras to wireless headphones - that permit exploits like KRACK. These security weaknesses can be used by hackers to remotely seize control of wireless devices, thereby giving them access to computers and phones on those networks as well. 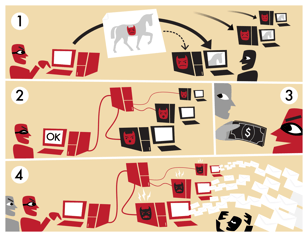 Cybercriminals can assemble massive groups of compromised wireless devices into ‘Botnets’ and use them to launch Denial-of-Service attacks. A large scale DoS attack can be devastating. Cybercriminals use the computers in their Botnets to send massive volumes of web traffic to clog up their victim’s network and such attacks can effectively shut down the targeted organisation. In 2016 a DoS attack seriously disrupted Amazon, Twitter and Netflix services.

Cybersecurity experts know that criminal organisations are amassing huge Botnet resources, but are not sure yet what purpose they will be put to. A surge in DoS attacks is predicted for 2018, enabled by Botnets built through IOT network hacking.